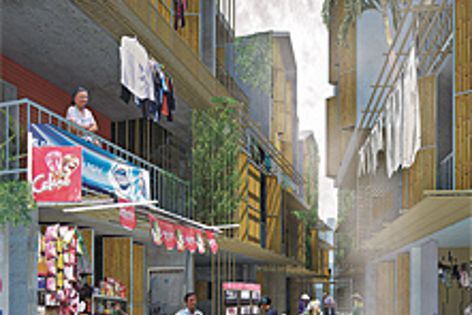 The recipient of the 2011 AA Prize for Unbuilt Work, presented by Architecture Australia in partnership with ISIS, was announced in front of more than seventy members of the architectural community who gathered at Robin Boyd’s Walsh Street House on Thursday evening, 2 February 2012. Ton Vu was the recipient of the prize, which was awarded for his project Sai Gon Informal.

Sai Gon Informal won for its ability to generate heated discussion and project into the future while having an architectural realization that could be materialized today. Ton Vu’s inspiration for the project came from his experience in Vietnam and his feeling that architects could make a difference to people’s lives there.

This year the jury also gave an honourable mention to a project that was a critical and poetic exploration of themes potent to Australia, and which led to considerable conjecture among the jury: Living with the Murray River: Tidal Garden by Times Two Architecture.

In addition to the major prize, three special mentions were given to projects that showed great merit, and that generated discussion on the potential of architecture to illuminate and solve issues critical to the built world. These were awarded to Valle Medina and Ben Reynolds of Palace for 10 Moments of Production, Daniel Spence for Blackwattle Bay Oyster Farm and Lucy Warnock, Master of Architecture, University of Melbourne, for Proteus Gowanus.