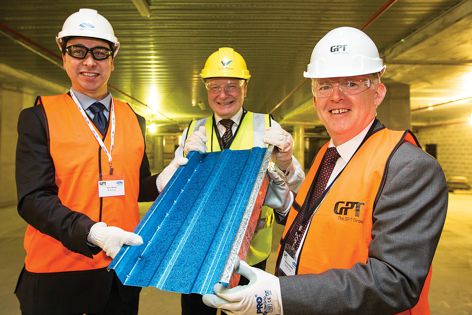 With a piece of the new Low-Glare Coated Deckform from Bluescope are (L–R) BlueScope’s Coatings and Product Technology manager Sean Wong, the Lord Mayor of the City of Wollongong Gordon Bradbery and The GPT Group’s Head of Development – Retail and Ma 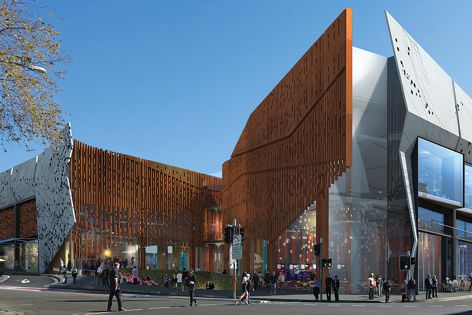 The $200 million expansion of Wollongong Central shopping centre in New South Wales is the first project in Australia to use an innovative new structural steel decking product from BlueScope.

BlueScope spent more than three years and $300,000 developing the new light-dispersing resin coating that is applied to the steel coils used to make Low-Glare Coated Deckform – a new, safer, permanent formwork product, installed for the first time in Australia in the Wollongong Central expansion project.

Formworkers who work with the Low-Glare Coated Deckform steel have reported it being safer and easier to work with as the reduced glare doesn’t impair their vision or orientation. UV radiation and heat are reduced compared to standard Deckform steel. Sturt Hodgson, project manager at Hansen Yuncken, the construction company behind the expansion at Wollongong Central, said that formworkers on the project preferred the low-glare product. “They’re impressed with how light it is to handle, how quickly it goes down and by the lack of defects on the slab’s underside compared with plywood – which can allow concrete leaks at the joins.”

More than 30,000 m2 of Low-Glare Coated Deckform has been used in the Wollongong Central expansion. BlueScope has also supplied structural steel for the project, including steel members for the roofing and wall structures and additional floor structure. steel.com.au