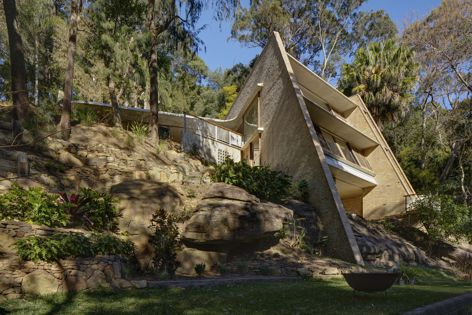 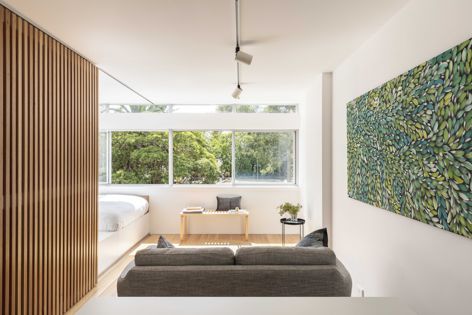 Boneca Apartment by Brad Swartz Architects was the winner in the Apartment or Unit category. Photography: Tom Ferguson.

A “remarkable,” “poetic” house anchored in a rock shelf on Sydney’s northern beaches has been named Australian House of the Year at the 2018 Houses Awards.

Now in its eighth year, the Houses Awards program celebrates Australia’s best residential projects across nine categories. It has become one of the country’s most sought after accolades, with 477 entries submitted in 2018 – 6% more than the previous year.

Receiving the top prize at a ceremony at Sydney’s Ivy Ballroom on 27 July was Peter Stutchbury Architecture’s Cabbage Tree House, which, in addition to being named Australian House of the Year, topped the New House over 200 m2 category. The masonry and concrete house leans back into the Bayview hillside, becoming a “physical manifesto of the character of its place.”

“Although this house is undeniably an impressive piece of architecture, it has the warmth, layers and inhabitation of a welcoming home,” the jury notes.

All winning and commended projects can be viewed on the Houses Awards website. The award program is presented by Architecture Media and supported by Cult, Artedomus, Asko, Blum, Haymes Paint, the Heritage Councils of Victoria and New South Wales, Maximum, Sussex, Think Brick and Tractile. housesawards.com.au