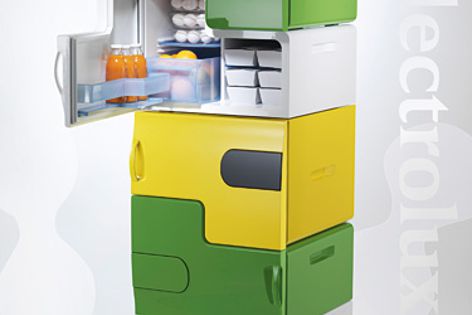 Nine finalists from around the world presented their innovative ideas for tomorrow’s household appliances at the Electrolux Design Lab 2008 finals, held Friday 10 October in Zurich, Switzerland.

The inventive product submission entitled Flatshare, designed by Stefan Buchberger from Austria, took out first place, impressing the judges with its ingenuity and consumer insight. Flatshare is a modular fridge with individual compartments for people who live with several roommates. The design consists of a base station and up to four stackable modules, allowing users their own personal refrigerator space. Flatshare can also be customized with various colourful skins and add-ons like a bottle opener.

Now in its sixth year, the Electrolux Design Lab 2008 invites undergraduate and graduate industrial design students to create home appliances of the near future, addressing food storage, cooking or washing. More than 600 entries were received from 49 countries around the world.