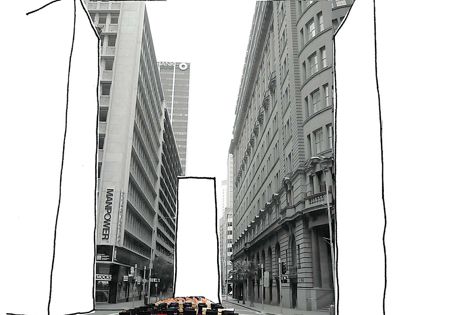 Tribe Studio’s winning submission for the AA Prize for Unbuilt Work envisaged Sydney in 2050, with the existing road netw

The winners of the 2008 AA Prize for Unbuilt Work were announced on Wednesday 12 November 2008 at a presentation evening at Melbourne’s Alto at GPO. The prize recognizes rigorous, inventive responses to contemporary architectural issues.

The 2008 prize winner was Tribe Studio for Sydney 2050 – a vision of a car-free Sydney in the near future. The project proposed using the former road network as a spacious network of interlinked linear sites suitable for new infrastructure, housing and institutions. The jury praised the proposition’s ability to provoke debate and discussion: “Full of ideas and inherent possibility, it reworks the grain of the city, showing how another civic paradigm might be overlaid on an existing urban condition.”

Run annually, the AA Prize for Unbuilt Work is open to architects, graduates, students and other built environment professionals. The overall winner receives a prize of $3,000 plus an Izona CoolDrawer from event partner Fisher & Paykel for the practice’s studio.