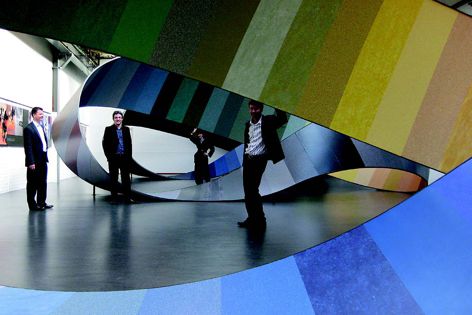 The winners of the Fly Forbo and Fly to Europe 2008 competition enjoyed a tour of London, Paris, Amsterdam and Reims. From left:

In September 2008, Stefan Mee of John Wardle Architects and John Thong of Wilson Architects flew to Europe as winners of the Fly Forbo and Fly to Europe 2008 competition.

Their winning project – the Queensland Brain Institute research facility (QBI) – used Forbo’s Marmoleum product in radically new ways. Vertically wrapping an entire internal stair balustrade at the institute in Papyrus White 3049 was a visual triumph and a technical challenge. The architects had found a new application for Forbo’s product.

The pair’s prize took in London, Paris, Amsterdam and Reims in a 14-day tour organized by Forbo’s David Blakemore. The trip encompassed London’s 100% Design exhibition and satellite events, giving them the chance to see work from imaginative emerging designers as well as the world’s established brands and their newest products. Forbo’s stand at 100% Design, in particular, drew in visitors keen to see the Forbo-striped, stand-alone pavilion – a rectangular box, open on two sides but with rounded, asymmetrical corners, creating a cocoon-like space to display the featured product, Forbo Touch.

Other stops on the trip included a tour of Forbo’s largest factory in Holland and the design studio, surrounded by the warming fug of natural linseed (the main ingredient of the product). The tour also took in a visit to Forbo’s oldest factory in Reims, France, set in the Champagne region. Laurent Thalot led a fascinating tour of the latter factory’s production lines and the felt carpet manufacturing zone.