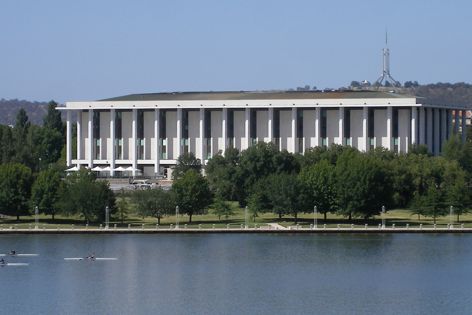 The National Library of Australia in Canberra extended its podium in the mid 1980s. In late 2005, GHD was engaged to provide a long-term solution to water ingress through the podium slab into the library areas below. It was imperative that the areas below the podium remain dry during the refurbishment of the podium as well as upon completion. Accordingly, the Wolfin waterproofing system was specified for the project. Manteena was appointed head contractor and constructed temporary shedding – up to 2,500 m² over the work areas. This involved the coordination of several trades and the implementation of a regimented works program.

Demolition works were commenced in May 2007. After plumbing changes and correction of falls and making good of the substrate were completed, the Wolfin S adhesive-backed membrane system was installed by April Showers Waterproofing. On completion and sign-off of the membrane works by Wolfin Membranes Australia, each deck area was flood tested for a minimum of 24 hours before being handed over to the builder.