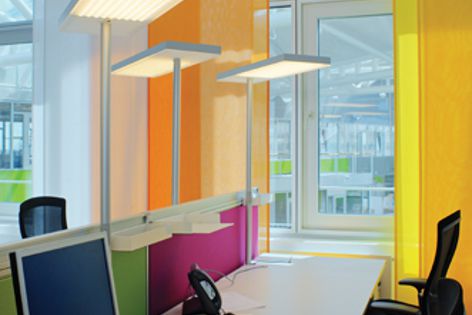 Designed and planned by Behnisch Architekten, the new Unilever headquarters in Germany is based on an innovative energy concept and has over 35,000 m2 of space for around 1,000 employees.

The building’s primary energy consumption during operation will be under 100 kWh/m2a. A newly developed SMD-LED system from Nimbus has been deployed for the entire building.

Dietrich Brennenstuhl, managing director of German company Nimbus, says, “LED is a very efficient light source. It has a warm light, like a traditional bulb, but it uses up to 70 percent less energy, and you don’t bring heat inside the building, which means lower cooling costs. And importantly, each luminaire has a very long lifetime. A normal halogen light has a lifetime between 1,000 and 2,000 hours. Nimbus LEDs are engineered for over 50,000 hours.”

As well as low operating costs, LED luminaires are low maintenance. Brennenstuhl says, “In a big office building, with the lights on 24 hours a day, the lights lasts 10 to 15 years.”

For architects, using Nimbus luminaires will give a smooth finish to ceilings. “Halogen lights need a lot of space in the ceiling – between 80 mm and 100 mm. Nimbus LED luminaries are just 12 mm high, so this means you don’t need a lot of space above the ceiling,” says Brennenstuhl. “Also, halogen lights throw a light spot on the ground, so you have a circle on the floor and the rest of the room is dark. With LEDs, the lighting effect is very near to natural daylight, so light is spread evenly throughout the room. The LED is a smooth, soft, white light.”