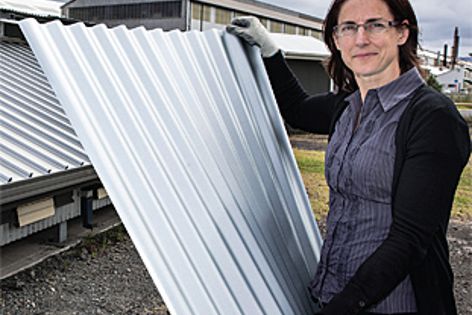 Bluescope Steel is preparing to roll out a third generation of its Zincalume steel. It features a patented new coating that has a smaller environmental impact (compared to original Zincalume steel) and which increases its durability. Next Generation Zincalume steel featuring Activate technology will enter production in the second quarter of 2013, bringing to fruition almost 20 years of efforts by Bluescope Steel to develop a longer-lasting metallic-coated building product.

BlueScope Steel market manager – commercial and industrial, Manu Siitonen, says Zincalume steel is renowned in Australian building and architectural circles for the galvanic action of the zinc in its coating, which gives it a self-sealing property and increases its lifespan.

“With Next Generation Zincalume steel we have improved the galvanic action of the zinc. With the addition of a new magnesium compound, it activates the aluminium in the coating composition to provide even more effective corrosion resistance. The result is a product that is more resilient when drilled, cut or scratched,” Mr Siitonen says.