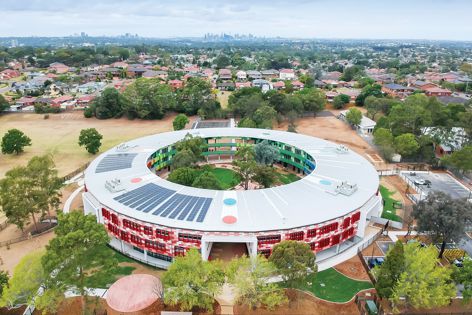 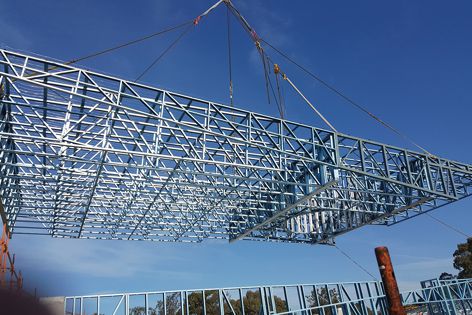 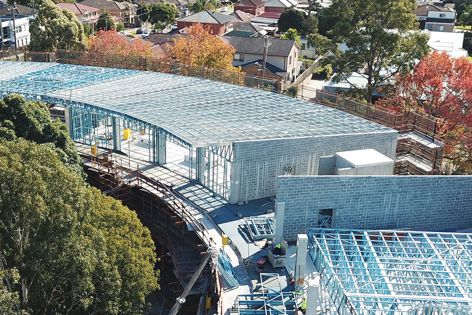 Frames made from TRUECORE® steel.

LGS framing made from TRUECORE® steel was used to deliver the project on a tight timeline.

Referred to as a “colosseum of learning,” Smalls Road Primary School in Ryde, New South Wales was designed by Conrad Gargett and built by Richard Crookes Constructions.

A 200-metre-wide open-air courtyard sits at the heart of the school, enclosed by flexible learning spaces, including a library and multipurpose sports facility.

Originally, the design called for 230 tonnes of hot-rolled structural steel on the upper level. By reworking the design to incorporate light-gauge steel (LGS), Austruss eliminated almost 120 tonnes of steel from the build and shortened the project timeline.

The majority of the LGS framing was fabricated off site, then assembled on site into large wall and roof modules. The modules were then craned into position.

Austruss’ managing director, Andrew Fowler, said, “At the same time as concrete slabs were being formed on site, in the area adjacent to the site we were assembling the roof trusses to be installed above that concrete structure.”

“We use TRUECORE® steel as we think it is the most reliable product in the marketplace, and the technical support and range of options available from BlueScope is unsurpassed.”

Frames made from TRUECORE® steel won’t twist or warp over time, or catch fire. They’re also termite- and borer-proof.

Frames made from TRUECORE® steel worked perfectly in creating the upper-level wall and roof modules for this circular design concept.

The parallel assembly of the wall and roof modules at ground level, while the third-floor structure was being created, resulted in program timesaving.

Precisely engineered and prefabricated, the wall and roof modules made from TRUECORE® steel endured the stresses of the crane lift to the third level of the build without issue. The lightweight framing was much easier to handle in comparison to steel structural beams.

The decision to assemble the large, prefabricated truss sections at ground level and crane them into position improved the ability to manage the “working at height” risk during this phase of the build. truecore.com.au