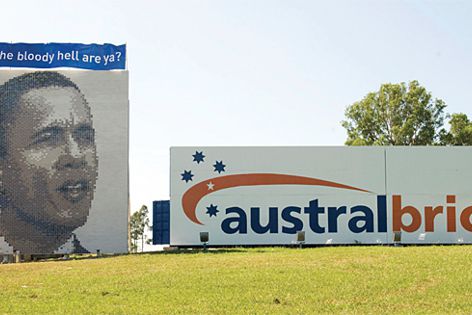 Austral Bricks’ tribute to US President

The 100-square-metre mural was built with more than 6,000 glazed bricks, laid over a five-day period by J&M Langon, who worked with Austral’s Burlesque and Dynasty ranges.

“The brick art mural demonstrates the versatility and contemporary nature of what can be achieved with bricks,” says Mark Ellenor, NSW general manager of Austral Bricks. “Austral Bricks is excited about the use of brick art in the creation of unique and interesting murals for architects and designers.”

The Barack Obama wall is the latest mural by the company, following the Michael Jackson tribute built in September last year.

The colours, including green, blue, leather and black, are not normally associated with bricks, but all are from the Burlesque and Dynasty ranges. Seven of the ten available brick colours were used in the piece.