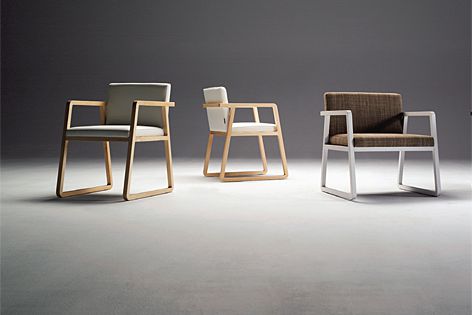 EbualÃ  has updated and expanded the successful Midori range for furniture company Sancal.

Inspired by a main character in the novel Tokio Blues by Haruki Murakami, Ebualà has created two new versions of the successful Midori chair and armchair for Sancal. The range has been expanded with a stool and a lighter chair without arms.

The creative capacity of Ebualà centres on the talents of Lluisa Morató, Marcos Martínez and Javier Herrero. After experience in bathroom product design for firms such as Bathglass and Mibaño, the designers developed a relationship with Sancal which led to the creation of the original Midori chair and armchair. Following the success of both, the Midori collection was expanded with two attractive and versatile stools. Stained in a wide range of colours, the final pieces retain the freshness of the solid wood.