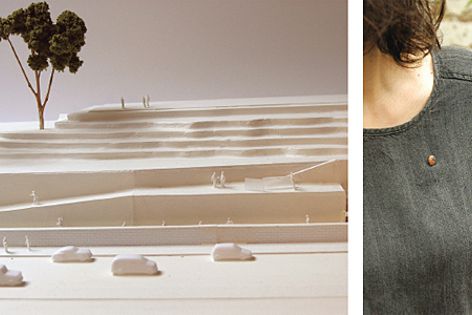 Winner for Unlandscaped, the 2011 Landscape Architecture Australia prize for unrealized projects, propositions and scenarios were announced on 4 May 2011 in Melbourne.

Claire Martin, Rowan McLachlan, Saskia Schut, Tyson Lundbech and Ying- Lann Dann won this year’s prize for their proposition “The Road Trauma Memorial Project.” The project is a conceptual exploration that touches on the metaphysical bridges between lived and spiritual worlds and is made in memoriam to those injured or killed on Victorian roads. The awards jury praised the team’s multidisciplinary approach, which combined practitioners with backgrounds in landscape architecture, jewellery design, digital media, art and architecture.

Three high commendations were given, to Brooke Madill for “The Suez Canal: An Excavation”; Adrian Marshall for “Great Northern Basalt Place”; and Pod 4/5 Design for “Plastic Soup.”

In total, forty-three submissions were received, covering a wide range of approaches, scales and programs. To see the full gallery of entrants, visit www.architecturemedia.com/unlandscaped.