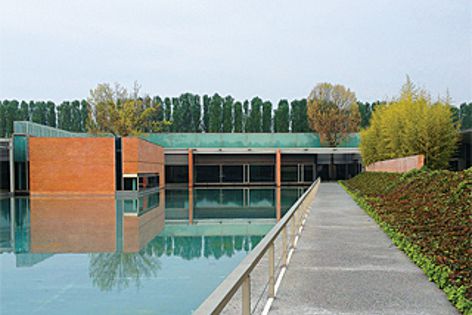 While visiting the 2012 Milan Furniture Fair, Architecture Media’s Jan Henderson stopped in at some Smeg factories to see how the company produces its high-quality appliances. Here she writes about her visit.

One of the highlights of visiting Italy for the 2012 Milan Furniture Fair was an invitation to visit two Smeg factories in Reggio Emilia. Thoughts of sleek design and innovation are a given when one talks about Smeg products, but seeing the workers in action gives an appreciation of the process. Knowing the origin of products is vital to understanding a company, and visiting the heart of Smeg, in Italy, gave me an insight into the company, their ethos and a greater understanding of their products.

Smeg’s modern factories are spotlessly clean, large and airy with clusters of greenery. Along with the people, there are state-of-the-art mechanics – robots that cut and assemble the components. The robotics are produced to Smeg’s requirements in northern Italy, the manufacturing hub of the country. Of course machines are only as good as the people who design and create them, the real difference is the people who work on the lines. In one factory, five hundred people assemble and test ovens and cooktops. In another, washing machines and dishwashers are produced with attention to detail and precision. Each factory has a common thread: pride in workmanship and dedication to producing a first class product.

At Smeg, research and development is key to the success of the company and a great deal of money is invested in the laboratories that create the world-class products.

Smeg has a heart, cares for its workers and plans for the future. This company prides itself on producing superior products, and it has a work ethic to match.